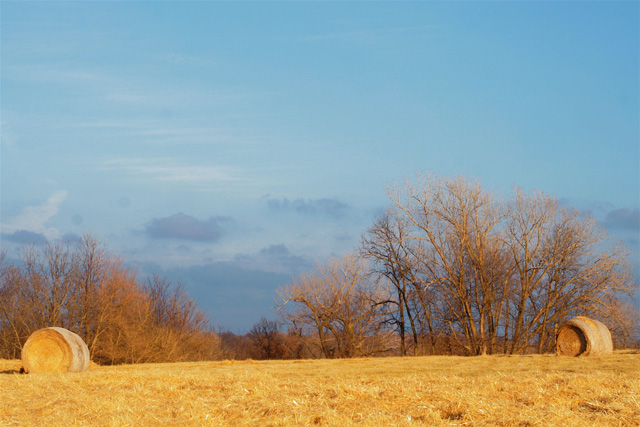 Its sloping hills unfolded into a grassy plateau high above the city. With no water, no housing, no fences, and no electricity, this land posed a formidable challenge to its new stewards. Two naïve and relentless twenty-something city kids set forth on their life’s work: to build a family and farmstead that produces and creates more than it consumes and destroys. What has grown from those hills, and that dream, is a farm and home not found in any other American city.

Within a sprawling Midwestern city, rampant with consumption and disjointed systems that so often characterize modern cities, we yearned to create an autonomous existence that more closely mimicked nature. Our “blank slate” drove us to build a farm that used minimal energy, that harnessed nature, and that utilized waste. We determined to build “right” the first time, even if it took ten years to finish.

After some considerable head scratching, we devised unique systems for shelter, water, waste and electricity. We had to fight tooth and nail just to permit these systems, let alone build them. Seven years in (and two kids later), we are still fighting, still building, and still solving problems, but the dream has solid footing and continues to evolve with each season. The day-to-day reality of URBAVORE is noteworthy: an urban farm, producing thousands of dollars’ worth of food a week while sequestering carbon, recycling water, composting community waste, producing electricity, and improving the soil. Just think what the planet would look like if all homes & businesses operated this way!

A Home in the Earth

Perhaps the biggest challenge of any farmer starting with raw land is simply “getting on” the land (or, rather, developing it to the point where you can live there). A home requires far more than a simple structure; it also requires water, electricity, heat, and waste disposal. Thus, building a home posed both the largest hurdle and the highest priority.

From our perspective, our desires were simple: a dry shelter, free of toxins, capable of simultaneously protecting us from the elements, while harnessing the sun and earth to enhance daily life. We wanted a few modern amenities like hot running water and a washing machine, but also wanted to keep our shelter “off-grid”. The 850 square foot earth-bermed design that we decided upon met those desires, and was basic enough to build cheaply (we hoped) and get through the City building permits.

Over four consecutive winters, Farmer Dan built almost all aspects of the home and the adjoining off-grid systems, from the foundation and concrete work, to the extensive plumbing and off-grid water system, electrical work, much of the carpentry, and so on. This project consumed us like a BEAST. The bitter cold months were spent doing construction from sunup to sundown while the rest of the year was spent in the fields, madly growing food to pay for materials. Thanks to Dan's unthinkable work ethic, determination, and sheer tenacity we prevailed and live to tell the tale.

Our modern day "hobbit home" sits on the highest point of our property, nestled in the cool belly of the earth. Concrete walls bear heavy loads of insulative earth. A large berm encompasses the north wall with a foot of soil on the roof. Earth consumes the south wall 6 feet up, at which point clerestory windows give way, creating a greenhouse effect. The east and west walls are completely glass - allowing us to see the sun rise and set. Operable windows at the base of these walls allow a constant cooling breeze to move through the home in the summer months. There is a composting toilet and wood burning cook stove. There is no gas-powered or electric heat, and no AC. The house stays cool in the summer and warm in the winter. Even in bitter cold (negative ten degrees or so), the interior temperature will not drop below 55 degrees. The sun and the earth work together to create comfortable conditions without the use of electricity or fossil fuels.

In March of 2016, we finally moved into our hand-built home. Just weeks later, Farmer Brooke gave birth to our second son, as the sun was rising upon this noble shelter. As time allows, we continue to craft & perfect the interior of our home (while our two rambunctious boys steadily destroy it).

Powered by the Sun 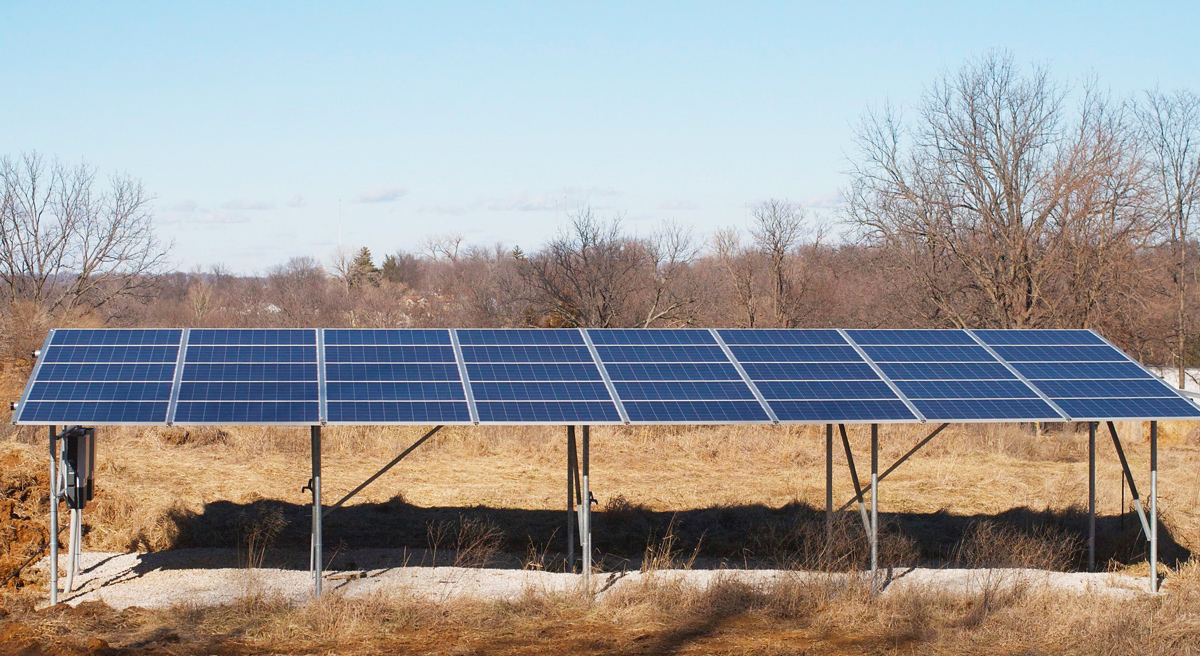 The sun fuels the food that we grow, so naturally we felt that the sun should power our home and farm at-large. With the help of utility rebates and tax incentives, we invested in a 10kW solar system. The panels are secured on posts, creating a roof and structure for post-harvest washing and handling.

Although being entirely off-grid held much allure, we decided to tie into the electrical grid for environmental reasons: the batteries needed to store solar energy in an off-grid set-up would eventually become hazardous waste. As battery technology evolves, we will reconsider this option. As it stands, we produce energy for the grid during the day and pull energy from the grid at night. On average, our farm & home produce four times the energy they consume.

As amazing as our chemical-free off grid water system is, this project definitely puts us in the camp of "crazy" environmentalists.  We wanted to take responsibility for our own water resource to avoid the many contaminants in typical tap water, but also to make water conservation real and tangible.  Remember that we're an urban farm; tying into city water (while costly) is pretty easy.

Instead, we implemented a maverick design that pulls water across 400 feet from a 1/4 acre pond.  The pond water is piped into a slow sand filter that uses sand and pea gravel to reduce sediment and eliminate 99% of toxins.  The clean water is then pumped into a large cistern and stored.  Before the water enters the home it travels through UV filtration for a final "zap" to make double-sure it is safe for potable use.

A similar system operates on the "back end".  A composing toilet catches our "solids", but grey and black water (including urine) cycle through sand and UV light to purify it for agricultural purposes.  Recycled water meets 100% of our field needs (the daily watering of livestock, greenhouse seedlings, and field transplants).

Both the potable and recycled water systems were specifically designed for us by a former professor emeritus at the University of Missouri, an engineer who specialized in "green" biological sewage systems.  Despite an engineers stamp of approval, we fought the City for months to get this system permitted.

Our water system proved the most excruciating piece of our project both on paper and in physical build-out.  Hundreds of feet of trench were dug, endless feet of pipe were laid and tied in ice-filled ditches in 15 degree temperatures.  Poor Farmer Dan toiled in trenches for hours in the bitter cold, day after day, connecting galvanized steel pipes with gloveless bleeding hands.  After several winters of chipping away at this MONSTER undertaking (operating heavy equipment, moving 20 thousand pounds of sand and gravel, connecting intricate pumps and electric lines, installing pressure tanks & UV filters, canoeing out to the middle of the pond to set posts and secure feeder pipes) a tattered & beaten Farmer Dan completed the exterior system!

He then plumbed the house (teaching himself to solder copper pipe), installed the sink and waste water lines, and together (with sheer trepidation) we turned on the water...crossing our fingers that it would actually work!  The water did flow, it tested clean, and we've been drinking and pondering this novel liquid ever since. 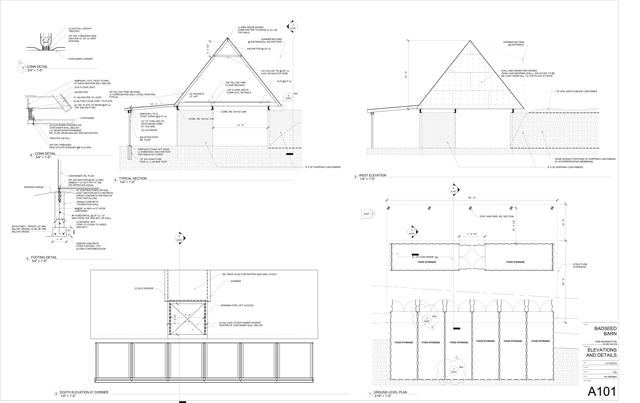 We work sun up to sun down year-round to manage our field production, and to continue the evolution of our farm's infrastructure.  Many projects are in progress and many lay ahead.  Our current undertaking is a rather non-conformist barn, comprised of used shipping containers.  Six twenty foot containers will sit side by side buried into a hill for insulative purposes.  Two of these containers will be large walk-in coolers for veggie & fruit storage and one will serve as a 50 degree room for specific crops, ferments, and canned goods.

Two containers will be placed adjacent to the bermed containers, connected by a more traditional pitched roof creating a barn loft for hay storage and crop curing.  Our goal is to create temperature controlled facilities and adequate farm storage, while using recycled materials and as little energy as possible.  Future projects include a greenhouse in winter of 2019 and simple apprentice housing (yurts) when time allows. 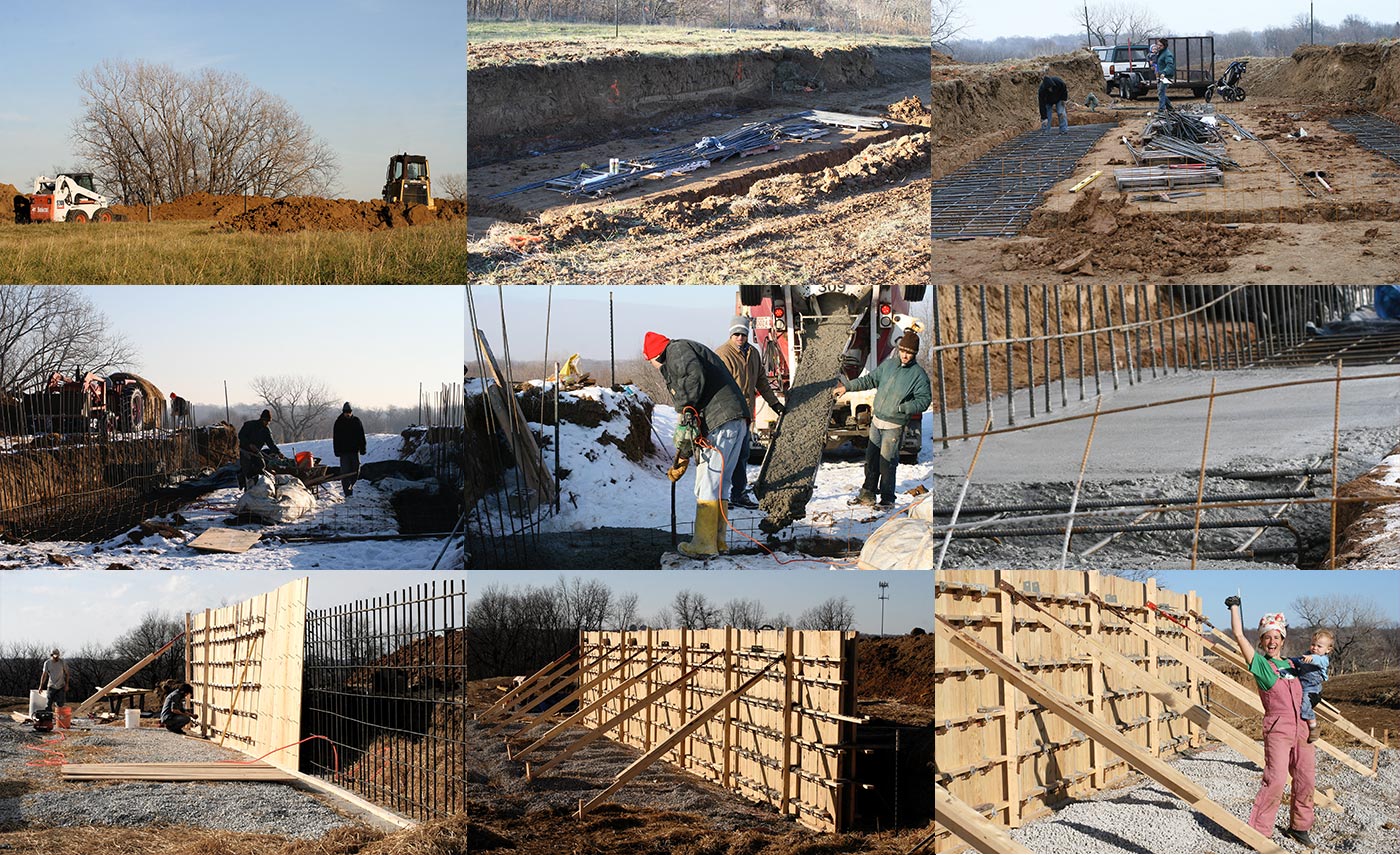 Early drawings from our architect reveal a thoughtful design working with nature: 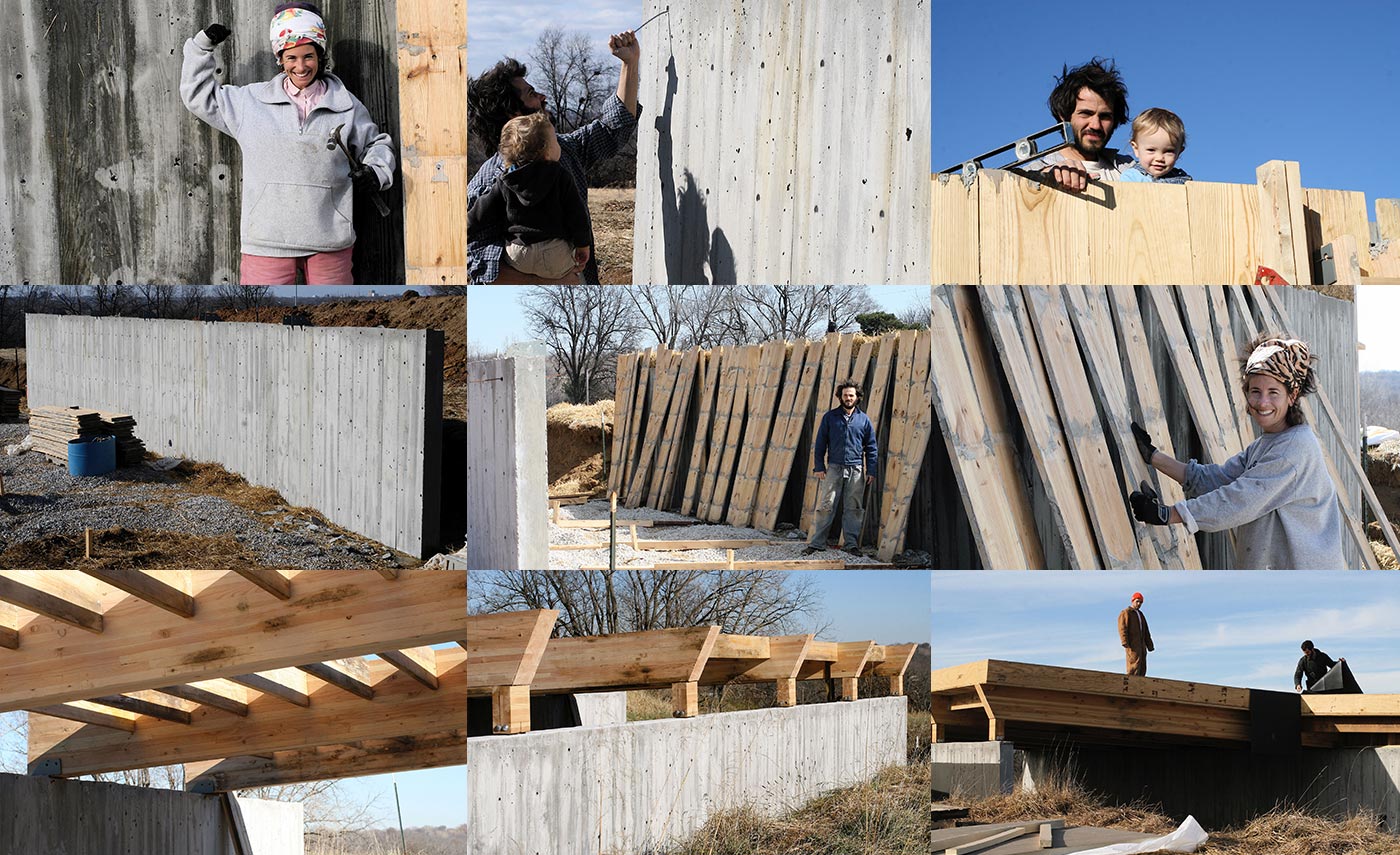 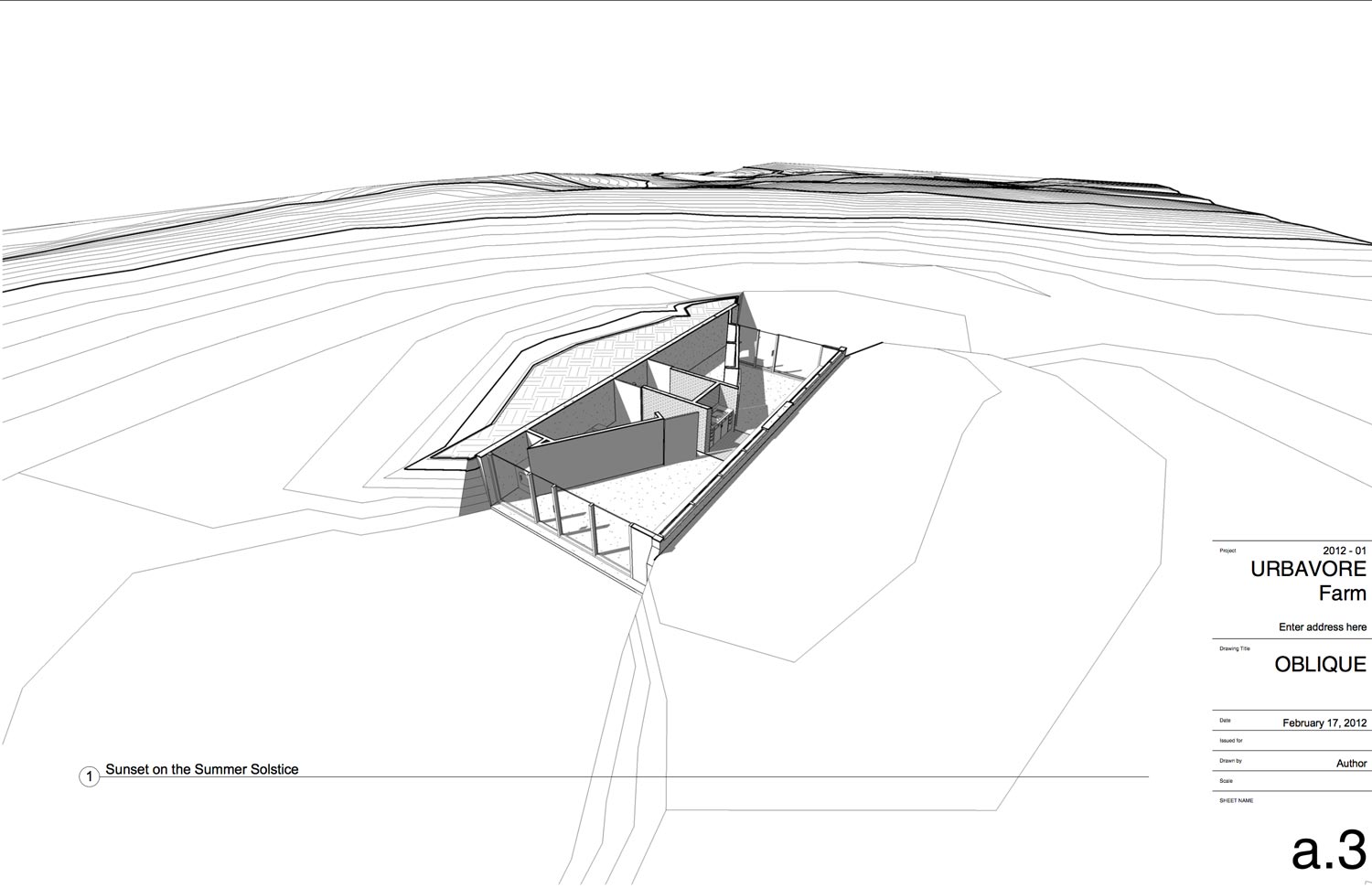 Latter phase construction and a glimpse inside: 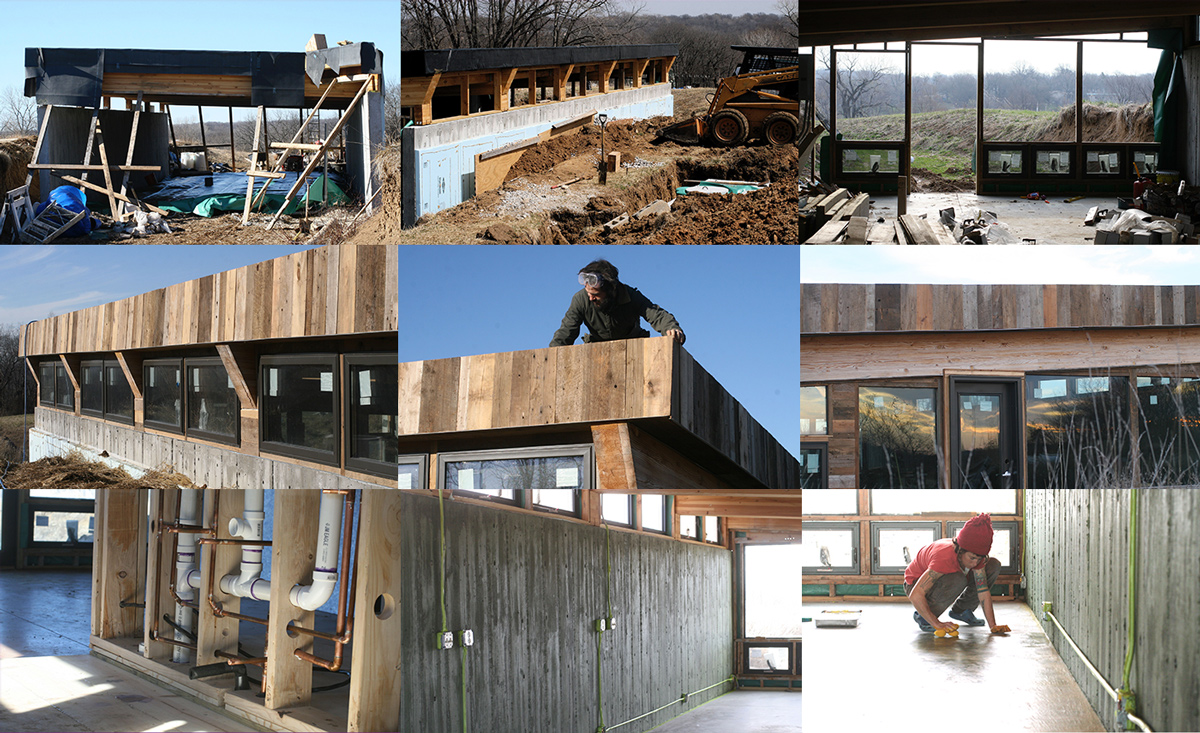 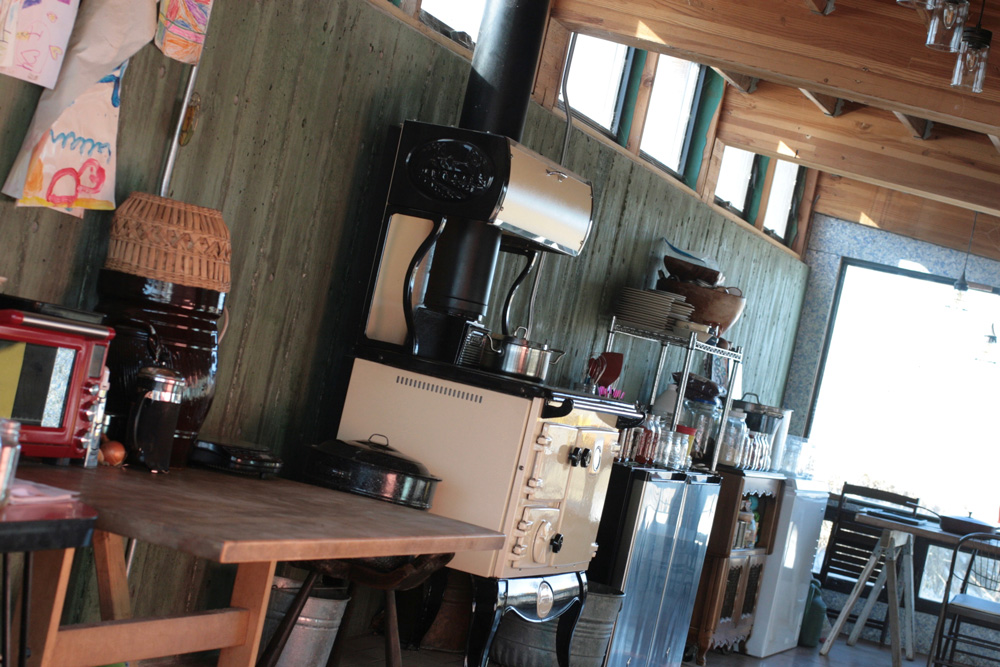 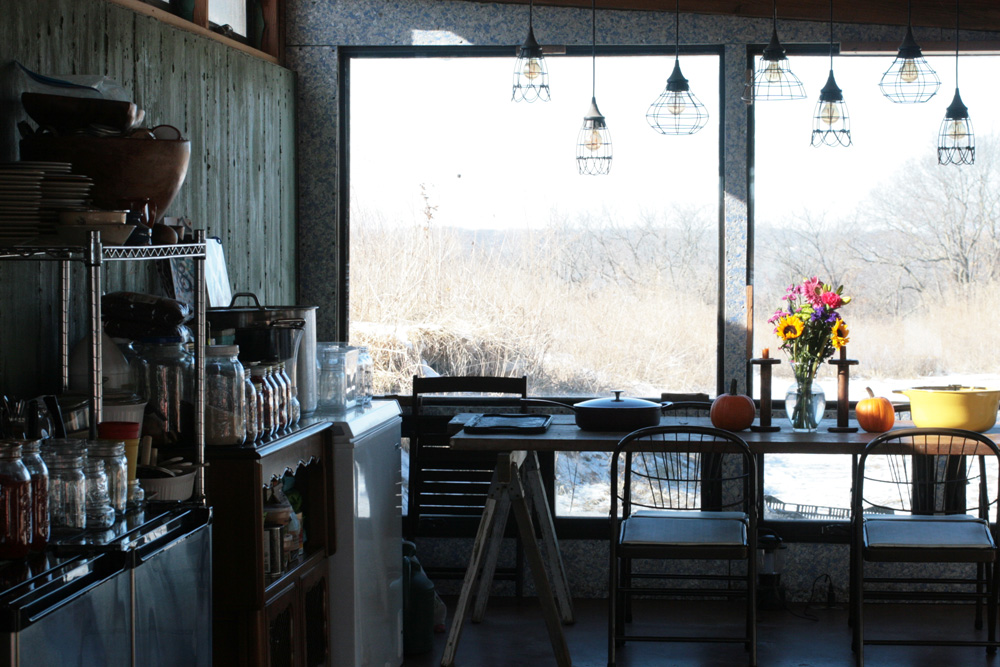 Many non-toxic, recycled, and reclaimed materials were used in the development of our farm & home. Let this guide be a resource for your next "green" project!